What are Evidence-based Practices?

An evidence-based practice is an instructional/intervention procedure or set of procedures for which researchers have provided an acceptable level of research that shows the practice produces positive outcomes for children, youth, and/or adults with ASD.

What EBPs have been identified?

The National Clearinghouse on Autism Evidence and Practice (NCAEP) recently released their new report idenityfing EBPs. The new report reviews literature published from 1990-2017 and identifies 28 EBPs and 10 manualized interventions that also met criteria. The list of EBPs is here.

The NCAEP and AFIRM teams are working to update our user-friendly materials and AFIRM modules to reflect these changes. Until then, please select an EBP identified in our 2014 review to access the AFIRM module about the practice. Each module provides an overview and general description, step-by-step instructions of implementation, an implementation checklist, and the evidence-base which includes the list of references that demonstrate the practice meets the NPDC's criteria.

To print out a specific EBP Brief Packet, access the AFIRM modules and download the EBP Brief packet.

Select the practice to access the AFIRM module and downloadable resources.

For more information on the AFIRM modules, please visit afirm.fpg.unc.edu or email the AFIRM Team at afirm@unc.edu.

To read more about the impact, usefulness, and relevance of AFIRM, please read the "Disseminating Information on Evidence-Based Practices for Children and Youth with Autism Spectrum Disorder: AFIRM" article published in the Journal of Autism and Developmental Disabilities (Sam et al., 2019).

Comparison of NCAEP and NSP EBPs

NCAEP (2020) and the National Standards Project (NSP, 2015) published reports of their systematic reviews of the literature and identification of evidence-based practices. Nineteen of the NCAEP EBPs were also identified as established interventions in the NSP report Five of the NCAEP EBPs were identified as emerging interventions (i.e., some evidence but not sufficient to be classified as an EBP). NCAEP identified four EBPs that were not included in the NSP previous report and NSP identified Language Training (Production) as an established intervention, whereas it was not included in the current NCAEP report. NSP also included Comprehensive Behavioral Treatment for Young Children, and NCAEP did not consider comprehensive treatment models in the current review. In summary, there continues to be a substantial overlap in EBPs identified by these two independent reviews. 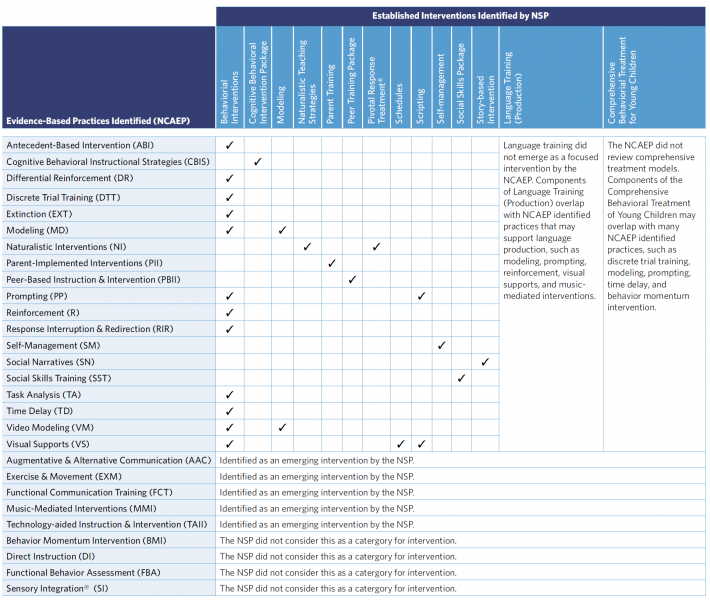